An exchange between all-female global leaders called for an increase in cooperation between countries to upscale action in climate change adaptation. In the lead-up to the COP27 climate change conference, the Ban Ki-moon Centre for Global Citizens (BKMC) in Austria hosted a hybrid high-level ministerial roundtable on climate adaptation under the patronage of the 8th UN Secretary-General Ban Ki-moon.

Dubai/Berlin/Cairo/Vienna 8 September 2022 – “As we move towards COP27 in Egypt and COP28 in the UAE, it is of utmost importance that the work on adaptation accelerates, especially in advancing on the Global Goal on Adaptation within the framework of the Glasgow-Sharm el-Sheikh Work Programme,” said Ban Ki-moon, Co-chair of the BKMC, as he welcomed high-level guests to the ministerial roundtable.

“Our efforts towards adaptation must accelerate. COP27 this year will be decisive. Only in the past couple of months we experienced the most severe drought in East Africa for 40 years, devastating floods in Pakistan, and wildfires around the globe. These events further escalate global energy and food insecurity. We need to advance the Global Goal on Adaptation within the framework of the Sharm el-Sheikh Work Programme as a priority,” said Ban Ki-moon.

Agreeing with the importance of such an acceleration, Austrian Minister Leonore Gewessler gave examples of how Austria is contributing to international and national efforts in tackling climate change. She mentioned the importance of data collection to better manage climate mitigation and adaptation efforts, stating that “we have to bring the solutions we have already identified on paper to life.”

The 8th UN Secretary-General took the global community to task: “At COP15 in Copenhagen in 2009, developed countries committed to mobilizing 100 billion US dollars a year by 2020 in climate finance for developing countries. Despite their efforts, according to the OECD, only 83.3 billion US dollars were provided by 2020.”

The governments of Germany and Canada are co-leaders in the development of the progress report on the Climate Finance Delivery Plan, a report to be published before COP27 which will outline how this commitment can be met. German Climate Envoy Jennifer Morgan underlined that climate finance remains a core issue in the debate, where more transparency and better use and access to finance is much needed. This includes an equal share of financing between mitigation and adaptation.

“The focus on adaptation, finance, loss and damage is essential. Germany remains committed to the goals of the Paris Climate Agreement. This includes fulfilling the Glasgow commitment to double adaptation finance collectively by 2025,” stressed Jennifer Morgan. 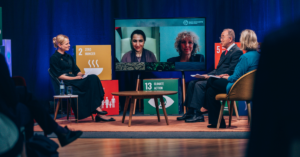 UAE Minister Mariam bint Mohammed Almheiri said she finds the Glasgow-Sharm el-Sheikh Work Programme promising. Looking ahead to COP28, she emphasized that the UAE is keen to continue accelerating climate adaptation efforts and exploring opportunities for effective global partnerships. She added: “One of our priorities is to enhance the adaptive capacities of the agricultural sector. We want to demonstrate how the UAE-USA joint initiative, the Agriculture Innovation Mission for Climate, advances food systems innovation and supports smallholder farmers.”

In a video message, Dr. Yasmine Fouad, Egypt’s Minister of Environment and COP27 Ministerial Coordinator and Envoy, reaffirmed Egypt’s preparedness to host COP27 in Sharm el-Sheikh on November 6-18th 2022. She noted that adaptation and climate were both top priorities for the Egyptian presidency, emphasizing that “now is the moment to stand up and keep progressing on the Global Goal on Adaptation. We must show the success stories that protect and keep our local communities climate resilient.”

Ban Ki-moon concluded the event by saying that “the upcoming COP27 in Egypt is an African COP. This presents an ideal opportunity to come together and ensure that adaptation is tackled comprehensively. It is a crucial topic to so many people in Africa, including the estimated 33 million African smallholder farmers.”