The second day started with the former UN Secretary-General Ban Ki-moon revisiting the United Nations Headquarters in Vienna. At the Vienna International Centre, he met with UNODC Director General Ghada Fathi Waly, International Atomic Energy Agency Director General Rafael Mariano Grossi, UNIDO Director General Li Yong as well as Martin Nesirky Director of the United Nations Information Service. The discussions focused on the current and future collaborations between the agencies and the BKMC regarding the implementation of the 2030 Agenda, Rule of Law, climate change and empowering young people.

In the afternoon, former UN Secretary-General Ban Ki-moon had bilateral meetings with the Austrian Chancellor Sebastian Kurz, Foreign Minister Alexander Schallenberg and the Mayor of Vienna, Michael Ludwig taking the opportunity to talk about, the situation in Afghanistan, the pandemic, and climate change. BKMC Co-chair Ban Ki-moon also presented the government leaders with signed copies of his new memoir “Resolved” underlining the importance of multilateralism in a divided world.

On his final day Co-chair Ban visited the offices of the BKMC in Vienna and took the chance to catch up with the team and the BKMC’s activities. Following the visit, Co-chair Ban’s final stop was a farewell lunch hosted by H.E. Ambassador Shin of Korea to discuss the UN’s history and anti-corruption efforts with IACA Dean Thomas Stelzer. 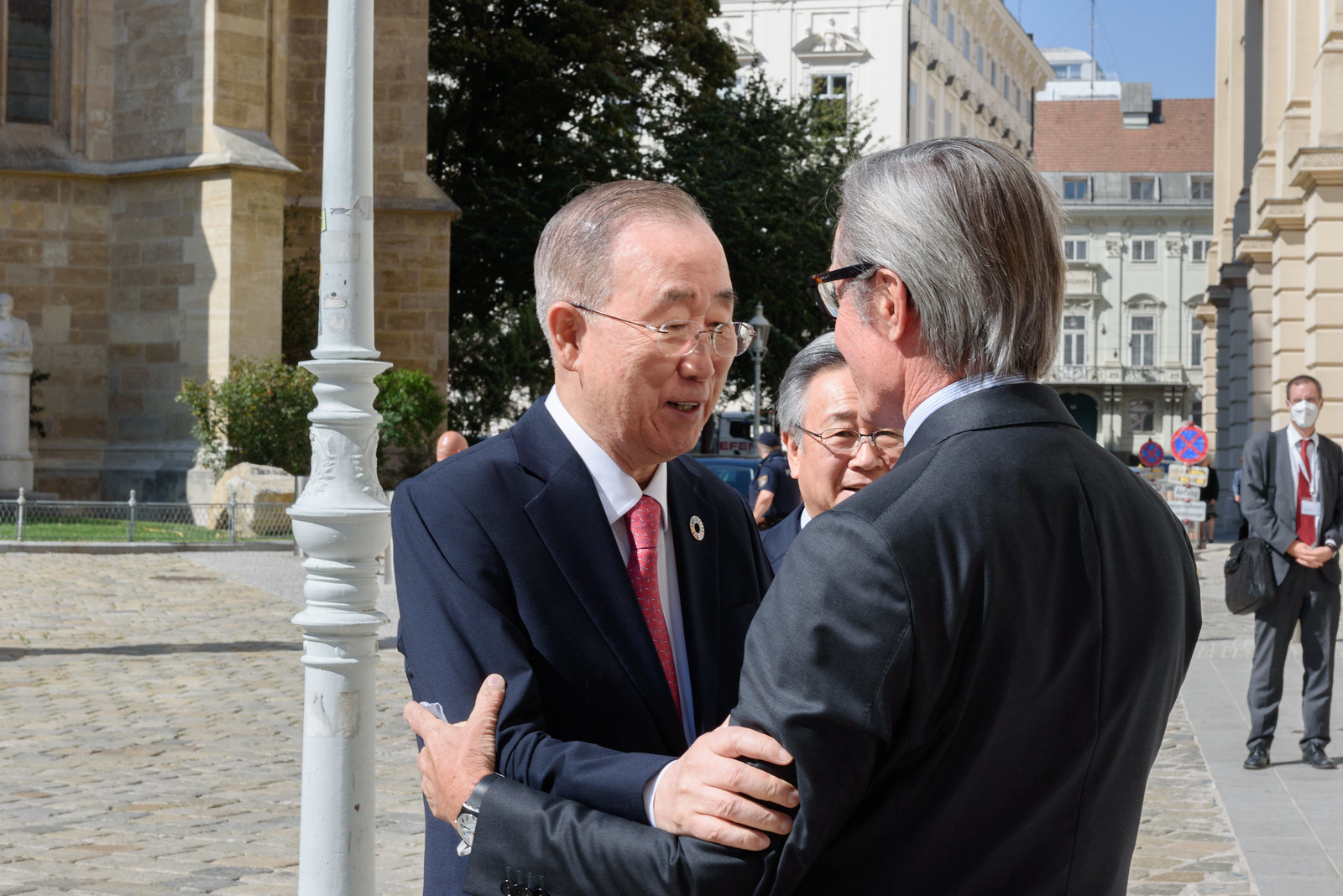 “On January 3rd, 2018, the Ban Ki-moon Centre for Global Citizens was officially inaugurated at the Austrian Chancellery. What a journey it has been since then?”

“We supported our co-chairs’ leadership, built lasting partnerships across the globe, spread the information on the SDGs and their implementation, and most importantly, touched the lives of hundreds of women and young people to support them and give them a voice, a seat at the table, and opportunities they did not have before.”

“We are grateful for all the support we received on our journey and are humbled by the vast tasks ahead to enhance global citizenship. But as an old Chinese proverb says, ‘No road is too long with friends at your side.’ Thanks to all global citizens for being with us on that journey!”

On February 14th, 2019, the Ban Ki-moon Centre for Global Citizens and the Austrian Chancellery signed an Memorandum of Understanding in Seoul, South Korea on the margins of the Global Engagement and Empowerment Forum 2019.

The MOU Signing ceremony was followed by a bilateral meeting between BKMC Co-chairs Ban Ki-moon and Heinz Fischer and CEO Monika Froehler, and the Austrian delegation from the chancellery.

As the youngest head of government in the world, Chancellor Kurz resembles the important role that youth leadership plays to ensure a sustainable future of our planet. As the Centre received fund from the chancellery this year to pursue projects for youth fellowship, this gave the opportunity for the two partners to sign the MOU to work towards the implementation of the SDGs by empowering young leaders.   Photos: Arno Melicharek

President Hashim Thaçi, First-Deputy Prime Minister and the Minister of Foreign Affairs Behgjet Pacolli, and Ambassador Sami Ukelli of the Republic of Kosovo visited the Ban Ki-moon Centre for Global Citizens for a meeting with Dr. Heinz Fischer, the former Austrian President and the co-chairman of the Centre. Ardian Arifaj and Blerim Shala, the two advisors to the President, and Faruk Ajeti, the Secondary Secretary to the Ambassador, were also present at the meeting. President Thaçi and Fischer discussed the current situation in Kosovo and the Balkan region and the way forward. While in Vienna President Thaçi also met with the Austrian Chancellor Sebastian Kurz and the former Chancellor Wolfgang Schüssel to discuss the expansion of the economic cooperation between the two states in political, economic, educational, and cultural fields. The final stage of the dialogue on normalization of relations between Kosovo and Serbia, process facilitated by the EU was also covered at the official meetings. Source: http://www.president-ksgov.net/en/news/president-thaci-departs-for-an-official-visit-to-austria-received-by-chancellor-sebastian-kurz

Ban Ki-Moon and Heinz Fischer launch a new Centre for Global Citizens to empower young people Vienna, 3 January 2018 Today Ban Ki-moon, (UN Secretary-General from 2007 – 2016) and Dr. Heinz Fischer, (Federal President of Austria from 2004 – 2016) officially inaugurated the Ban Ki-Moon Centre for Global Citizens in Vienna at a ceremony at the Federal Chancellery of Austria, at the invitation of the Chancellor of the Republic of Austria, Mr. Sebastian Kurz. END_OF_DOCUMENT_TOKEN_TO_BE_REPLACED